You can find tourist information, tourist itineraries and guided tours for those who want to know everything about the beauties of the Liguria region. Tourists can organize their holidays in the Ligurian territory both by the sea and in the splendid Ligurian hinterland.

In addition to the hotels to stay in, it is possible to rely on one of the many agritourisms that are always growing in the region, favored both by the climate and the convenience of tourists to easily pass from the sea to the mountains and for the tempting culinary offer. There are also many bed and breakfasts both along the coast and in the hinterland, arranged in characteristic period farmhouses or eighteenth-century villas near the sea. Less widespread but well distributed are the campsites, of which those in the hinterland are distinguished by their proximity to the sea and generally cooler nights.

As for hiking lovers, it is possible to stop in one of the many shelters scattered all over the Ligurian hinterland and the same thing goes for restaurants, taverns and taverns where you can eat traditional specialties: in the Riviere it is, above all, of fish menus , while the country cuisine is found in the hinterland and everywhere you can taste the Ligurian wine .

Traveling along the 260 Ligurian kilometers is made more comfortable by the train, which frequently connects Genoa and Savona with their main centers and sea transport, active and functional especially between the towns of the Gulf of Tigullio . Getting around by car is not easy due to the territory that often makes it difficult to enter the region but also along the coast through the various tunnels dug into the rock, while slow but efficient are the bus lines.

Ligurian Art and Culture, from Prehistory to Gothic 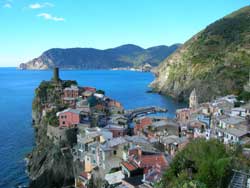 The history of Ligurian art begins in the caves of the Ponente, with the venus and the horse graffitied on a wall of the Balzi rossi , but also the ceramics of the funerary equipment of the Young Prince in the Finale area and the graffiti of Mount Bego .

During the Iron Age, Ligurian society was divided into social classes, as evidenced by the findings of the necropolis of Chiavari and furthermore, that of Genoa describes a civilization dedicated to trade and exchange with other Etruscan, Greek and Phoenician peoples. The castellari then, are what remains of the defensive architecture of the period, with walls up to 5 meters thick.

Mount Bego in the Ligurian Alps is an imposing massif that hosts more than 100,000 rock carvings, left by shepherds over three centuries for religious purposes, perhaps as a tribute to the gods of nature.

Visit the "Art and culture in Liguria" route!

In Liguria the first hunters settled in the caves near the coast already in the lower Paleolithic. This is evidenced by the numerous human remains found in this area of which the oldest, discovered in the Vallonnet cave (now French), dates back to 900,000 years ago. 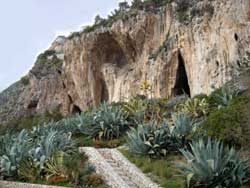 A short distance away, in the Grotta del Principe ai Balzi Rossi , near Ventimiglia, an iliac bone of a woman dating back to 240,000 years ago was found, and also in this area there are traces of Neanderthal man in many coastal caves, but also at Sanremo, in the weapon of Taggia, near Savona (in the Toirano caves, for example) and near Finale Ligure where numerous tools, hunting tools and engravings from the life of our ancestors have been discovered.

In particular, in the Finale area there is the sumptuous burial of the Young Prince (Arene Candide cave), dating back to 21,000 years ago.

Visit the "The History of Liguria" route!

The territory of Liguria 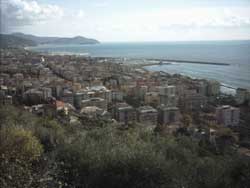 Liguria, almost 270 kilometers long and a maximum of 35 kilometers wide, has one of the most beautiful landscapes in Italy with the contrast between the sea and the mountains and hills that seem to throw themselves into it. This territory forced man to build cities and roads along the coast and along the valleys, but also on the sides of the mountains (the Alps to the west and the Apennines to the east), mainly for defense purposes.

Originally, the Ligurians lived on the heights while the sea belonged to the Greeks and the Etruscans : the distinction between coast and hinterland, less inhabited but also important for history and culture, began to fade only after the Second World War due to the construction of roads communication.

Visit the "Territory of Liguria"!

Porta Soprana is the highest of the five gates of the Barbarossa Walls . Next to it you can visit the remains of the Cloister of Sant'Andrea , demolished in the 19th century and below it the Casa di Colombo , a reconstruction of the probable birthplace of the Genoese navigator.

Piazza Sarzano , the main center of the city in the Middle Ages, then degraded after the war, has regained its splendor after the restoration of the Monastery of San Silvestro , now home to the faculty of architecture. At the end of the square, there is the thirteenth-century church of Sant'Agostino , dating back to the thirteenth century, whose adjoining convent houses the Museum of Ligurian architecture and sculpture . The isolated Piazzetta di Campopisano , originally a prison for the Pisans defeated in the battle of Meloria in 1284, is now made up of tall, colorful terraced houses.

In Piazza Dante , in the “dei Savoia” part, the arcades and the former Town Hall are the emblem of the Savoy architecture of the late nineteenth century. To visit the Calata GB Cuneo , with its arcades and the fish market, and not far away, the eighteenth-century Collegiate Church of San Giovanni Battista , the heart of the historic center. 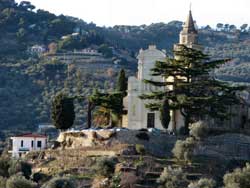 The Porto Maurizio area is perched on Colle Parasio which takes its name from the " Paraxu ", the palace of the Genoese governor: on the slopes of the hill is the Cathedral of San Maurizio , begun in 1781 but finished in 1838. many works between the 17th and 19th centuries. In the same square there are the Civic Art Gallery and the International Naval Museum of Western Liguria .

Examples of Genoese hegemony are the numerous portals, pointed arches and structures such as the Palazzo Pagliari (14th-16th century), the Oratory of San Pietro and the 14th century Convent of Santa Chiara .

Cinque Terre and the Gulf of Poets 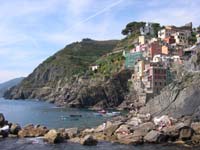 In the Ligurian Levant, squeezed between the mountains and the sea, the Cinque Terre ( Monterosso , Vernazza , Corniglia , Manarola and Rio Maggiore ) and the Gulf of poets have always attracted tourists and legends: it is said, in fact, that God himself created this corner of paradise with five boulders thrown in bulk in the aftermath of the creation of the world, but not only that, even Hercules seems to have passed through here, and to have clashed with the strong character of the inhabitants of these rugged and magnificent places.

Leaving aside the mythology, it is certain that these legendary places have attracted the poetry of authors such as Eugenio Montale who, to the land where he spent his holidays with his family as a boy, dedicated the collection Ossi di Seppia , and many others during centuries, from Virgil to Petrarch , from Lord Byron to the French writer George Sand , who have contributed to giving the poetic name to the gulf that reaches La Spezia from Portovenere .

Ligurian cuisine is rich and varied, the traditions of the sea are linked to those of the hinterland and to the exotic flavors brought here by centuries-old trade. It is historically a “poor” cuisine but one of the richest in variety in the Mediterranean.

Olive trees, in Liguria, were introduced by Benedictine monks 800 years ago and today, there are three DOPs for Ligurian oil: Riviera dei Fiori , Riviera del Ponente Savonese and Riviera di Levante .
The inevitable extra virgin olive oil is a basic element of Ligurian cuisine and also serves to prepare the Genoese focaccia and Recco focaccia . Different from each other, they are both made with flour, water, salt and (a lot) of oil, ingredients to which the focaccia di Recco adds crescenza, replacing the fishermen's cheese.

The processing of silk originated in the '500 in Fontanabuona and in the Tigullio , in the' 600 the Genoese velvets and damasks were renowned and precious. The textile handicraft of lace and bobbin and macramé lace was born in the 12th century and is still widespread.

In the eighteenth century fabrics of Indian origin arrived in Genoa and thus the production of Mezzari was born , large veils with various uses with prints of Persian origin.

The working of metals with the filigree production of gold and silver of the Genoese Friars reached its maximum splendor, and the working of iron in the valleys between Genoa and Savona was very active, above all thanks to the exploitation of the iron of the Island of Elba.

Visit the path of the Ligurian Traditions "!

Fun and sport in Liguria 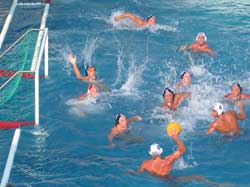 In Liguria the sport par excellence is water polo . Surfing and windsurfing are practiced in Varazze , Sanremo and Bogliasco , but also kitesurfing , water skiing , kayaking , rowing ; scuba diving is of great appeal, to visit the “protected” seabed of the Ligurian Riviera: the sole of Gallinara , the mount of Portofino , the Cinque Terre and also the wreck of the Haven oil tanker off Arenzano .

In the hinterland there is space for cycling , jogging and free climbing enthusiasts. There are many cyclists in Liguria, even if the roads are perfect and there are almost no cycle paths. The best is the one that connects San Lorenzo a Mare to Ospedaletti , passing through Sanremo , but also the Coastal Park of the Piani d'Invrea , from Cogoleto to Varazze .

Visit the "Fun in Liguria" route!