The sixteenth century and the century of the Genoese 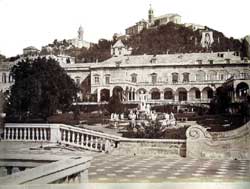 In Liguria there are no great testimonies of the Renaissance which arrived here late, and of which we can mention the Palazzo della Rovere in Savona; during the 1500s, however, at the same time as the period of wealth generated by the financial activities of Genoa, Genoese and Ligurian art developed, but they were also called "foreign" artists who brought Baroque art and Mannerism.

The construction of sumptuous noble villas began, symbols of wealth and well-being, as in today's via Garibaldi (Strada Nuova) in Genoa which, with its 14 palaces, enchanted Rubens and encouraged him to talk about it to his fellow citizens as an example to follow.

The Palazzo del Principe in Genoa, built by Andrea Doria , after Charles V conferred on him the title of Prince of Melfi, is a great and beautiful late Renaissance work.

Villas and noble palaces were built throughout Liguria and many of them were stuccoed and frescoed inside and out, with the consequent effect of colorful and embellished cities.

The Baroque in Liguria experienced a particular season as the local artists reworked the styles of the foreign painters and sculptors with whom they had come into contact, giving life to original productions: Alessandro Magnasco was a nonconformist, and a forerunner of modern painting.

In the same period, the collection of nobles was born who began to preserve sculptural objects and paintings, which today can be found in museums and Baroque churches.

The sculpture had among its main exponents, Puget and Parodi but also Maragliano , author of many crucifixes preserved in various Ligurian churches.

Art and Culture in Liguria