Porta Soprana is the highest of the five gates of the Barbarossa Walls . Next to it you can visit the remains of the Cloister of Sant'Andrea , demolished in the 19th century and below it the Casa di Colombo , a reconstruction of the probable birthplace of the Genoese navigator.

Piazza Sarzano , the main center of the city in the Middle Ages, then degraded after the war, has regained its splendor after the restoration of the Monastery of San Silvestro , now home to the faculty of architecture. At the end of the square, there is the thirteenth-century church of Sant'Agostino , dating back to the thirteenth century, whose adjoining convent houses the Museum of Ligurian architecture and sculpture .

The isolated Piazzetta di Campopisano , originally a prison for the Pisans defeated in the battle of Meloria in 1284, is now made up of tall, colorful terraced houses.
From Piazza Sarzano you go down towards the church of Santa Maria di Castello : dating back to the 12th century, it stands on the remains of an older one dating back to the 7th century and, under it, Etruscan and Roman remains have been found. In the cloister there are the Art Museum and the Library .

The only building spared by the decree of 1296, which limited the height of the buildings, is the Embriaci tower , named after the hero of the first crusade.

From Piazza Embriaci you reach the Romanesque church of S. Donato which has been restored several times but dates back to the 11th century, inside which preserves the triptych Adoration of the Magi of Cleeve , from 1515.

Not far away is Piazza delle Erbe , the center of modern Genoa, where the youth of the city gather for an aperitif, a widespread ritual in the city that seems to have been born on the transatlantic liners that sailed from Europe to the Americas.
From the hill of Castello to via San Lorenzo , you can read the Roman layout of the city with the orthogonal alleyways that develop in various directions of the plain, which preserves various medieval buildings and towers. 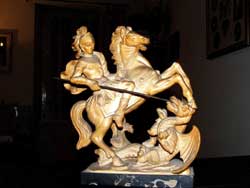 The Palazzo Ducale, dating back to the end of the 16th century, was the seat of the republican government and overlooks Piazza Matteotti with the neoclassical facade and Piazza De Ferrari with the side redesigned in 1935-40. Inside there are eighteenth-century frescoes in the halls of the Maggior Consiglio and the Minor Consiglio , and the loggia and the Baroque chapel (XVII century) host exhibitions and displays.

In Piazza Matteotti there is also the church of Gesù , run by the Jesuits and built in the sixteenth century on the remains of a temple dedicated to Saint Ambrose from the sixth century, inside which there are two altarpieces by Rubens and an Assumption by guido Reni .

The Cathedral of San Lorenzo dating back to the ninth century, located in the nineteenth-century square of the same name, has undergone various workings over the centuries and the mixture of genres, from the Romanesque to the Gothic of the Alps, and inside the largest of the side chapels the relics of San Giovanni Battista , patron saint of Genoa. Under the cathedral, you can visit the Museum of the Treasure of San Lorenzo and near the church the Diocesan Museum or.

In Piazza San Matteo , which between the thirteenth and sixteenth centuries was the seat of power of the Dorias, stands the Romanesque church of the same name, in whose crypt rests the admiral Andrea, who had the interior rebuilt in the sixteenth century; it was originally built in 1125 and rebuilt again in 1278. It houses frescoes and marbles by Gian Battista Castello and Luca Cambiaso.

The Campetto , from the sixteenth century is a residential area where there are palaces such as that of the Melograno and the Imperial Palace . From here you enter the ancient via Scurreria , and all around the carved portals testify that this was the seat of artistic craftsmanship in the 15th and 16th centuries. The church of Santa Maria delle Vigne dates back to 981 but the facade is neoclassical and the interiors of the seventeenth century, while the bell tower is in Romanesque style.

Strada Nuova , often painted by Rubens, has been a UNESCO World Heritage Site since 2006. There are the Palazzo del Podestà (the palace of Nicolosio Lomellino), Palazzo Carega Cataldi , seat of the Chamber of Commerce, inside which you can visit the hall of mirrors. The complex of the Strada Nuova Museums , Palazzo Doria Tursi , seat of the town hall, Palazzo Rosso and Palazzo Bianco make up : the picture gallery of Palazzo Bianco and the rooms of Palazzo Rosso preserve paintings and frescoes from the 15th to the 17th century.

The National Gallery of Palazzo Spinola di Pellicceria , between via San Luca and via della Maddalena, is a Genoese noble residence of the seventeenth-eighteenth century with works of the Genoese baroque, from Strozzi, to Piola to Rubens. 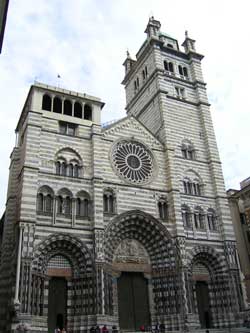 The church of San Luc a , in the homonymous street, preserves frescoes by Piola from 1695. The street ends in Piazza Banchi with the Church of San Pietro from the end of the sixteenth century, while, between via San Luca and via Orefici, there is the Loggia dei Mercanti , born for the city trade which became the first commodity exchange in Italy. Opposite to Piazza Banchi you arrive the ancient San Siro , rebuilt at the end of the 16th century, from here you enter via Lomellini with its sixteenth-eighteenth-century palaces, and the birthplace of Mazzini which today is the Museum of the Risorgimento .

Sung by De André, the lively and multi-ethnic via del Campo leads to via Prè, where the Commenda di San Giovanni di Prè is located , rebuilt in 1180 as a convent for the Knights of Malta . The church is composed of the lower and upper part with the bell tower and the convent hosts conferences.

In via Balbi there is the Royal Palace , which was the residence chosen by the Savoy in Genoa. Inside are the Galleria di Palazzo Reale and a splendid gallery of mirrors, dating back to 1685 and decorated in 1730 by Domenico Parodi. On the border between the historic center and the residential neighborhoods in the hills, there is the baroque - mannerist church of SS. Annunziata del Vastato with frescoes and paintings from the Genoese seventeenth century.

Genoa and the Tigullio Gulf